The Internet of Things (IoT) technologies are revolutionising businesses and our personal lives in equally impressive ways the world over. Because it has such a broad scope, however, IoT faces a wide array of challenges. In this article, we'll discuss Narrowband technology - one of the most promising solutions to one of IoT's biggest dilemmas.

What Is Narrowband (NB) IoT?

Narrowband IoT, also known as NB-IoT, is a type of low-power wide-area (LPWA) technology. It is a solution to one of the core challenges of IoT technology - connectivity. For the Internet of Things future to become possible on a wide scale, a new form of device connectivity needs to be created.

IoT requires a large number of devices to be connected and communicating on a massive scale, all of the time – which is not well suited to Wi-Fi networks, the likes of which we use in our homes.

This is where NB technology comes in. It's a low power, a high-efficiency cellular network that uses unused radiofrequency. That means that Narrowband towers could be created specifically for use with IoT devices - a specialised network reserved for IoT deployment. With NB, cellular connections for our personal devices and our IoT systems will each have dedicated and secure networks, increasing reliability for everyone.

The Benefits of Narrowband IoT

The biggest driver of Narrowband technology is how versatile and broad its uses are. An entire networking channel almost completely untapped, in an age where connectivity is the name of the game.

One of the greatest aspects of Narrowband IoT is how flexible it is. Rather than relying solely on data rates or bandwidth to improve connectivity, NB can use both at varying degrees to maximise speeds.

The data rates for NB-IoT are also superb. Traditional networks are rated for around 40 devices per household, while NB networks can support over 150 devices. So unlike traditional cell signals, there isn't too much concern over whether or not Narrowband networks will be able to support the large demands of IoT tech.

Narrowband technology uses a lower power frequency than traditional cellular networks, so it can be used at much larger scales while still remaining reliable and affordable. The frequency these NB networks operate at (200kHz) is a much simpler waveform to transmit, reducing the load on modems. This is essential for IoT since many of its applications involve international operations.

There is also significantly less competition for NB networks globally than for LTE (Long-Term Evolution) networks like 3G or 4G. This means that expanding the coverage for NB networks can happen at a much more rapid pace than traditional networking, making a future where Narrowband signals can be accessed easily nearer than you might expect.

One of the most important aspects of an IoT network is performance. Not only is it important that all of the connected devices are communicating at reliable and quick speeds, but also that they aren't draining too much power while doing so. This is important as IoT systems will eventually be powering cities, transportation, and large manufacturing facilities.

NB-IoT technology is also extremely practical. Once you understand the concept, it's easy to come up with ways to utilise it as a tool for productivity, safety, and efficiency.

One of the most exciting applications of NB-IoT is that of the smart city. Once NB coverage becomes more commonplace, incorporating it into populated areas will make city maintenance and safety significantly easier. From detecting gas leaks to directing traffic, IoT will play a big part in the cities of tomorrow.

Manufacturing, farming, public safety, retail; in the same way that the internet has already revolutionised so much of our lives, the spread of NB-IoT tech will create a new, connected future, where the benefits of modern technology become a seamless component of our daily lives.

Why Narrowband IoT Could Be The Next Big Thing?

For something to be the "next big thing," it needs to meet two requirements. First, it has to solve a problem, and second, the problem that it's solving needs to be a widely relevant problem. NB-IoT meets both of these requirements in a big way.

It's plain to see that the Internet of Things is developing at a rapid pace, and it's having a massive impact on just about every aspect of our lives. And for a mass IoT future to be realised, we need a new, easily deployable, low power consumption, and widespread method for connecting IoT devices.

Narrowband technology meets all of the checks on this list, is popular among international connectivity providers, and has little to no competition at the time of writing. It's a pretty safe bet that it's going to become the go-to choice for IoT platforms of the future.

To learn more about other types of IoT connectivity and how to choose the one that suits your business needs, please check out our quick guide to IoT Connectivity.

While the implementation of NB-IoT is progressing, we at JT IoT have already developed solutions suitable for future IoT connectivity.  Download the "JT IoT Solutions Overview" and learn more about how we can help you connect today. 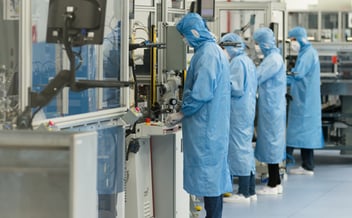 The 5 Types of IoT Platforms

So, you've started to read about IoT systems, understand the basics, and are already teeming with...

IoT Connectivity Options: Which is best for your business?

IoT connectivity is one of the essential parts of a successful IoT platform. More and more...